Today I was working as a volunteer with Gloster Gauntlet wings, which needs new fabric. The GT-400/OH-XGT is owned by the Lentotekniikan Kilta and is the only airworthy Gauntlet in the world.

My book about Finnish Fighter Commander Eka Magnusson was published few weeks ago. Research and writing were hard work that lasted over a year. The reason I haven’t written for a long time to the Workshop news. Under Magnusson Finnish Fokker, Brewster and Messerschmitt Squadrons achieved incredible results in the wars against Soviet Union.

I’m sorry, the book is only available in Finnish.

Undercarriage unit supplied to the restored Spitfire P7540. More at the Testimonial page.

A bit of fun during a busy summer. Last Friday I was lucky to get a flight by the iconic DC-3. The sound of two Pratt & Whitney radial engines was the same as last time – over 50 years ago! 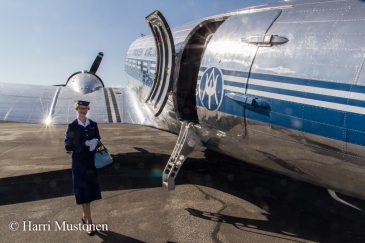 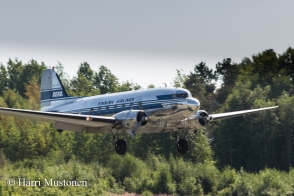 An U/C unit is ready for shipping again. These are the desired static Spitfire parts! 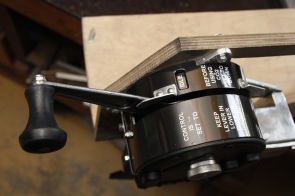 An UC unit being prepared for a customer. These hand-made parts need countless hours, not to mention what the research and the design has required before that.

A set of Hurricane boost controls is ready now. The control is located on the port side of the instrument panel. After research I decided to make different versions because the colors appear to vary depending on the sources and the aircrafts. 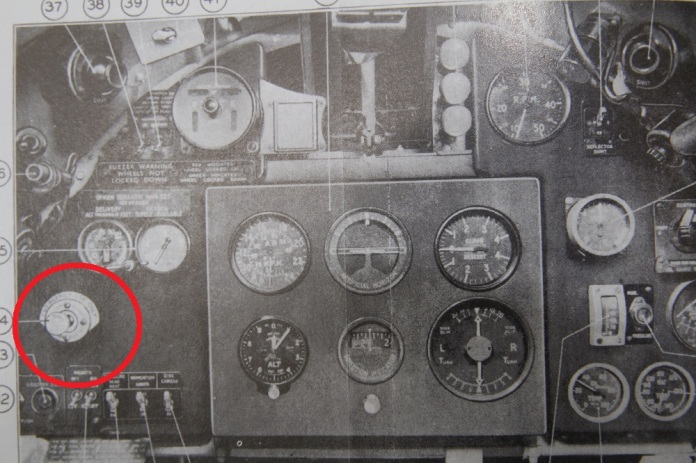 Under construction is now the Hawker Hurricane boost control. It look’s simple but is quite complicate to make. I have constructed a spring loaded piston so that the touch is like in the original one as one pull the lever. 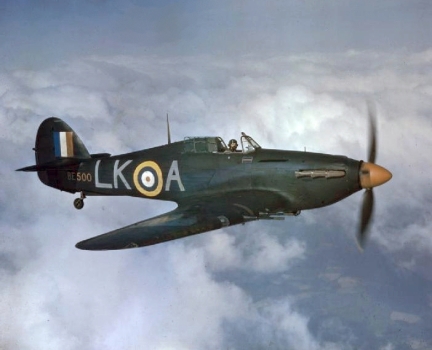 A lot of Lancaster controls and Spitfire IFF switch boxes made on request.

Merry Christmas from the Workshop!

A new series of Spitfire throttle quadrants. These quadrants have accurate friction gear and they are like original ones.

The new U/C unit plate is ready now. It is made of plastic using 3D technology and I must say it is the best available on the market. Suomen 3D-ratkaisut (Finnish 3D Solutions) company did a great job! 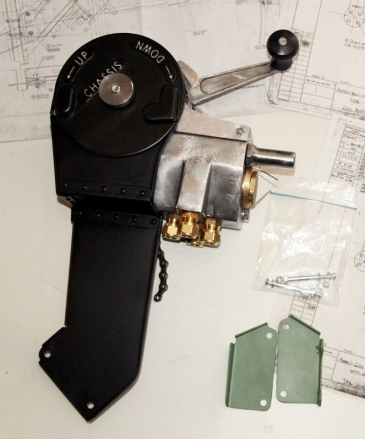 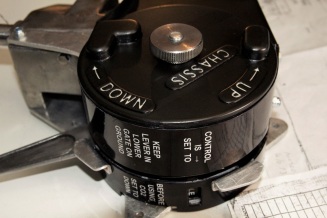 Some brackets and undercarriage emergency valve systems under production.

Long time no see! A new Spitfire U/C unit is on the test bench. Unit is nearly complete, just waiting for new cover plate which will be made from plastic by using 3D technology. These repro plates will be the most accurate available! 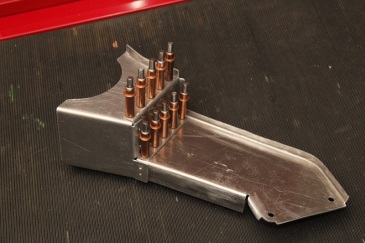 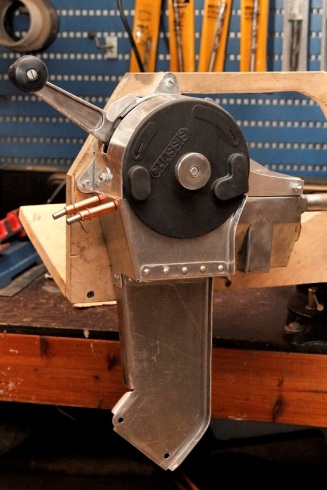 It’s been a while since I wrote the last post. However, I have been busy with the Spitfire stuff. Now I have made the chassis emergency unit with dummy Co2 bottle. The unit comes to the starboard side of the Spitfire cockpit, beside pilots seat.With the unit (situ beside the unit) comes the emergency instruction sign, which is now engraved to the plastic. The bottle looks simple but needed a lot of work as one can’t find proper size metal bottles from the store shelves!

So, here it is: the landing lamp lowering control which includes also lamp dipping lever.

The kind of control was used only in the Spitfire Mk II during Battle of Britain and the original one is extremely rare item nowadays. I made the body and the dipping lever from 3 mm aluminium sheet. Needs some details but will be ready next week.

Recently I have enjoyed by making small components. Soon I will release a rare part that only belongs to Spitfire II cockpit, just below and port side of the instrument panel.

Two U/C units are now finished and ready for shipping to UK. Please note that I have recently released the Fiver Flights blog and the Testimonial page.

Have been busy doing some U/C units. These takes a lot of time and effort as there is so many details and different phases of work.

The undercarriage control unit is finally ready! It was quite a task to fit the mechanism with the sprocket and UP/IDLE/DOWN indicator. All parts are metal except the front plate and the lever knob.  The valve block has even the safety wires like real ones have!

The unit situ on the starboard side of the cockpit and was used all Spitfire and Seafire Marks. The DOWN appears as the lever is fully backward and the UP as the lever is forward, otherwise the IDLE is shown.

The U/C unit apparatus is near complete. It’s really complex and still needs some adjustment.

Released under Parts for Sale page Flight Gear page, where one can find some vintage RAF stuff.

The chain guard is riveted now with aircraft rivets. Next comes the production of mechanism.

Today I made the mounting brackets for the chassis control unit.  The brackets are made from sheet metal with welded reinforcements. They hold the pulleys also.

The Spitfire sector plate is not from Mk IX or XVI as I assumed before. When I reviewed it closely I noticed that the first five numbers are 349 39. 349 identify it Spitfire Mk Vc, LF or Vb. The last two numbers 39 denotes it’s from engine control.  I thought that Mk V’s had always the mixture lever also, so that in the sector plate should be two sections, but one has to believe the part numbers!

Many enthusiasts have been asking the Spitfire chassis control unit, so I try to make one and if it works few more after that. I have now made the frame and the valve block. The frame is quite simple, I made it from 3-5 mm aluminium sheet, but the valve block is different. As a matter of fact it is really complex, even the dummy one, which I am making. I have welded 4-5 mm aluminium sheet to form it, but it was a hard, long and dirty work. Welding aluminium is not an easy task. I have to make the block other way in the future. 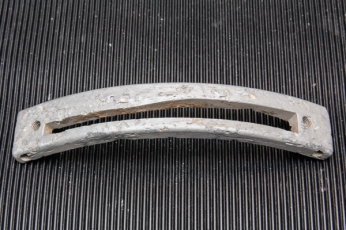 Got an original Spitfire throttle quadrant sector plate. Have seen better days, but it is rare and very good as a reference. This is probably from Mk IX or XVI as they were sometimes without idle cut lever with the throttle lever only. 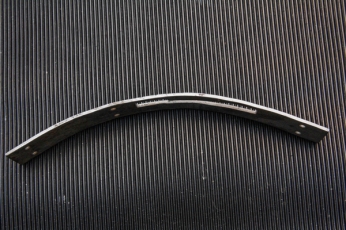 With the Spitfire sector plate came also a plate from an unkonwn aircraft. I´would be happy, if someone recognizes it. So, if you have any idea where it’s from or want to purchase it please contact me via email.

Making a mounting plate for supercharger light and switch from 2 mm aluminium sheet. Also few fuel cock control plates for dual levers are under production – the cock controls are very popular as they are very rare. Both plates goes to engraving tomorrow and will be available after a week.

The early type as used in Spitfires Mk II and V is ready now. It has an aluminium bottom plate, it is like a flange of the valve housing. All pistons are now made of steel.

Got the first units last week and currently assembling them.  I had to hone and polish them a little bit and change the plastic piston to the iron made, because it didn’t work as I thought. After that these stainless steel made units look great.

The first single lever unit is ready. Levers are made from 4 mm aluminium and the frame is welded from 3 mm sheet metal. The shaft and the sleeve are made from steel. The front plates are 2 mm aluminium sheet and have engraved letters.Waiting for the sleeves, which comes between levers, for the other units.

The first frame is ready now and the levers are riveted to the sleeve. Waiting for the front plates from engraving. 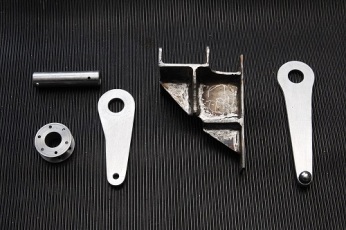 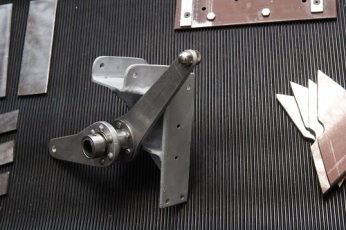 This is the part, which all Spitfire simulator enthusiasts have waited: a high quality and functional Spitfire flap control unit. And one can even choose the unit for early or late Spitfire Marks! The cam levers and the piston housing of the late type are made by using 3D Printing technology. In this case stainless steel is used as a material. The older type housing is made of iron and manufactured by machining. Inside of the unit is the spring loaded piston (plastic) which a handy simulator builder can connect to the micro switch. The spring loaded unit gives the feeling that it’s connected to the real valve. So it’s ideal also for purely display use. Both units will be released in Spring 2017.

Dual lever unit as used in marks II-V and a single lever unit for late Mk V and other late marks. The levers are made of 4 mm aluminium and the frame sheet metal. The front plates are 2 mm aluminium sheet and will have engraved letters. Currently five units in production. Next, it’s time for manufacture of the frames. 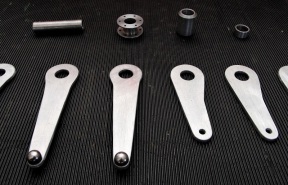 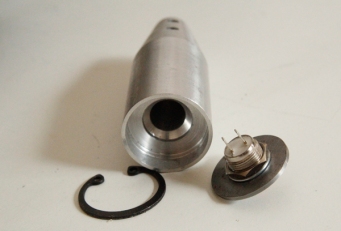